Trending Now
Melissa to showcase Unison Data Quality Management Platform
‘Days Gone’ headlines April’s batch of free PlayStation...
How to add a kids profile to your...
Here’s what’s you don’t want to miss tomorrow...
Scientists: Grizzlies expand turf but still need protection
Survey Says… March 31st, 2021
PPF, NSC, SCSS, KVP, 5-year Post Office FD...
Apple might reveal its Mixed Reality headset much...
What Are Jute Rugs? Understand Their Pros And...
This Is What No One Tells You About...
Tech

NEW YORK — The second Jennifer Bates walks away from her post at the Amazon warehouse where she works, the clock starts ticking. She has precisely 30 minutes to get to the cafeteria and back for her lunch break. That means traversing a warehouse the size of 14 football fields, which eats up precious time. She avoids bringing food from home because warming it up in the microwave would cost her even more minutes. Instead, she opts for $4 cold sandwiches from the vending machine and hurries back to her post. 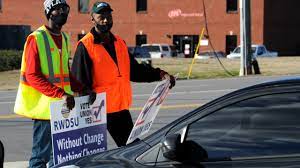 If she makes it, she’s lucky. If she doesn’t, Amazon could cut her pay, or worse, fire her.

That kind of pressure has led some Amazon workers to organize the most significant unionization push since it was founded in 1995. And it’s happening in the unlikeliest of places: Bessemer, Alabama, a state with laws that don’t favor unions. The stakes are high. If organizers succeed in Bessemer, it could set off a chain reaction across Amazon’s operations nationwide, with thousands of more workers rising and demanding better working conditions. But they face an uphill battle against the second-largest employer in the country, with a history of crushing unionizing efforts at its warehouses and Whole Foods grocery stores.

Attempts by Amazon to delay the vote in Bessemer have failed. So too have the company’s efforts to require in-person voting, which organizers argue would be unsafe during the pandemic. Mail-in voting started this week and will go on until the end of March. A majority of the 6,000 employees have to vote “yes” to unionize.

Amazon, whose profits and revenues have skyrocketed during the pandemic, has campaigned hard to convince workers that a union will only suck money from their paycheck with little benefit. Spokeswoman Rachael Lighty says the company already offers them what unions want: benefits, career growth, and pay that starts at $15 an hour. She adds that the organizers don’t represent the majority of Amazon employees’ views.

A Guide to the National Broadband Network