ColourPop Cashmere Forever 5-Pan Pressed Powder Palette ($10.00 for 0.15 oz.) includes three matte shades and two shimmer shades in purple/plum tones. I was pretty impressed with the matte purple hues–they were pretty pigmented and blendable, and these are often trickier shades to master. The shimmery lavender was somewhat sheer, which brought down the score of the palette a bit. 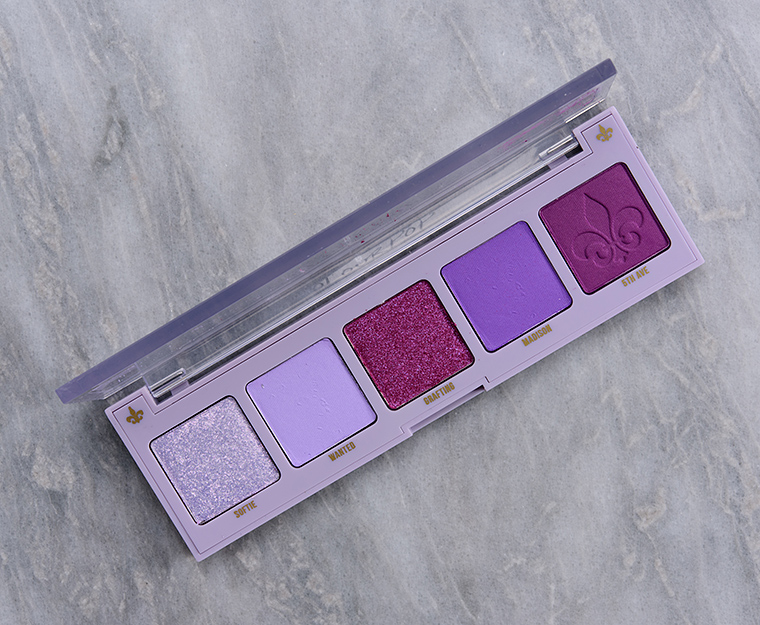 Softie is a pale lavender with cooler undertones and warmer, barely-there gold sparkle. It had semi-sheer pigmentation that didn’t build up without using a dampened brush. The texture was lightly emollient, so it wasn’t as prone to fallout as it could have been, which made it easier to work with. It wore nicely for eight hours before fading a bit.

for details on general performance and characteristics (like the scent).

The new Pressed Powder Shadow formula is supposed to be “highly pigmented” with an “ultra-velvety and silky” texture that is “long-wearing” and “adheres easily to the eyes.” Most of the shades have semi-opaque to opaque pigmentation that applies well to bare skin, blends out without issue, and lasts for seven to eight hours. The matte eyeshadows tend to be a little more powdery, though soft and finely-milled, in the pan, while the shimmers have a creamier, dense consistency. Occasionally, the more sparkly or metallic shades apply better with fingertips or a dampened brush.