RALEIGH, N.C. — When Michael Jones started a side hustle shooting drone photos and videos for realtors, his clients wanted more: Images with property lines on them to better understand where their fences should be.

It seemed like a good use of emerging technology that met apparent consumer demand. Jones was careful to add a disclaimer: His maps weren’t meant to replace the proper surveys that are often needed for such things as mortgages, title insurance, etc., and land use applications. But after two years of steady business, Jones was slapped by the state of North Carolina in 2018 with an order that grounded his drone. The Board of Examiners for Engineers and Surveyors said he faced criminal prosecution for surveying without a license. 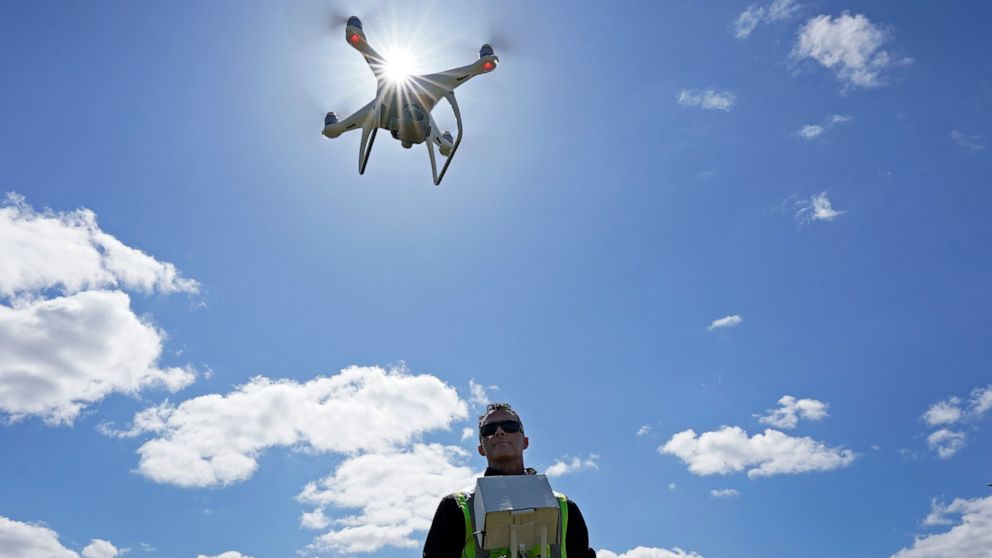 Eager to deploy a technology that’s disrupting the staid practice of surveying nationwide, Jones sued last month, accusing the board of violating his First Amendment rights.

“I would just like to have the right back to fly,” Jones said. “I don’t feel like I’m offering any surveying, and more or less, I’m telling people this is not accurate mapping, this is only for visual, and all of my clients understood that.”

Jones is one of many drone pilots coming into conflict with regulations designed to protect surveying professionals, whose exclusive roles are being disrupted now that it’s possible to nearly precisely combine line drawings with images to resolve property disputes better.

According to David Benowitz, the head of research at Drone Analyst and a former employee at DJI, the world’s largest commercial drone manufacturer, Jones’s lawsuit represents the cutting edge of this coming disruption. “This has been rumored about and talked about for years now. Drones have changed the game in surveying.”

The challenge goes both ways: Surveyors would need Federal Aviation Administration approval to fly drones professionally, and drone operators would need to pass state licensing exams to produce legal surveys. Neither side wants to take on the training and expenses.

But Kurt Carraway, executive director of the Applied Aviation Research Center at Kansas State University, said licensing boards should do more to embrace partnerships by researching the accuracy of drone mapping and encouraging the use of drones, particularly in places where a surveyor can’t safely do the work.

“I would think that with the continued development of technologies and positional accuracy that it’s likely that drone data can be captured in a way that is compliant with those surveying standards,” Carraway said.

A final notice Jones got from the board in 2019 ordered him to stop engaging in “mapping, surveying, and photogrammetry, stating accuracy, providing location and dimension data, and producing orthomosaic maps, quantities, and topographic information. The board declined to comment to The Associated Press but said it would file a formal response to the lawsuit.

Jones, 44, of Goldsboro, said he couldn’t afford a lawyer, so he abandoned drone mapping, resulting in over $10,000 in lost business. This January, a libertarian law firm offered to represent him.

Sam Gedge, an attorney at the Institute for Justice, plans to argue that Jones has the right to freedom of speech by taking photos and videos and producing artwork for clients. He’s seen similar disputes in Mississippi, Oregon, and California.

In the Mississippi case, the Virginia-based law firm reached a settlement in December that allows Vizaline, a real estate analytics firm accused of performing unlicensed surveying, to use public data to draw property lines on satellite photos.

“Many states have enforced their laws in a way that is under the radar,” Gedge said. “They just send warning letters to people … and for most people who receive that letter, as Michael did, you’re gonna knock it off because nobody wants to be the target of a government enforcement proceeding.”

Walter Lappert, a 35-year-old Tampa, Florida resident, founded two drone-manufacturing companies that now partner with engineers to provide mapping services, Triad Drones and Charlotte UAV. He said he lost out on a good chunk of a $300,000 Charlotte-area government contract because surveyors objected to his drones.

Lappert said he understands the board’s desire to protect an industry that has consistently been undercut in recent years by unlicensed drone operators who can do a less-than-accurate job for substantially less money. “Inexperienced people are going out and taking jobs and sub-par delivering on what the actual technology can do,” he said.

He’s compromised by partnering as a sub-contractor with engineering firms or surveying companies, but he’d like to do the work independently. Service work is the best bang for the buck,” Lappert said. “I can go out in one day and make $25,000 doing service work versus it might take me three months to sell a $100,000 drone.