CASA GRANDE, Ariz. — A harvester rumbles through the fields in the early morning light, mowing down rows of corn and chopping up ears, husks, and stalks into mulch for a feed at a local dairy.

The cows won’t get their salad next year, at least not from this farm. There won’t be enough water to plant the corn crop.

Climate change, drought, and high demand are expected to force the first-ever mandatory cuts to a water supply that 40 million people across the American West depend on — the Colorado River. The U.S. Bureau of Reclamation’s projection next week will spare cities and tribes but walloped Arizona farmers. 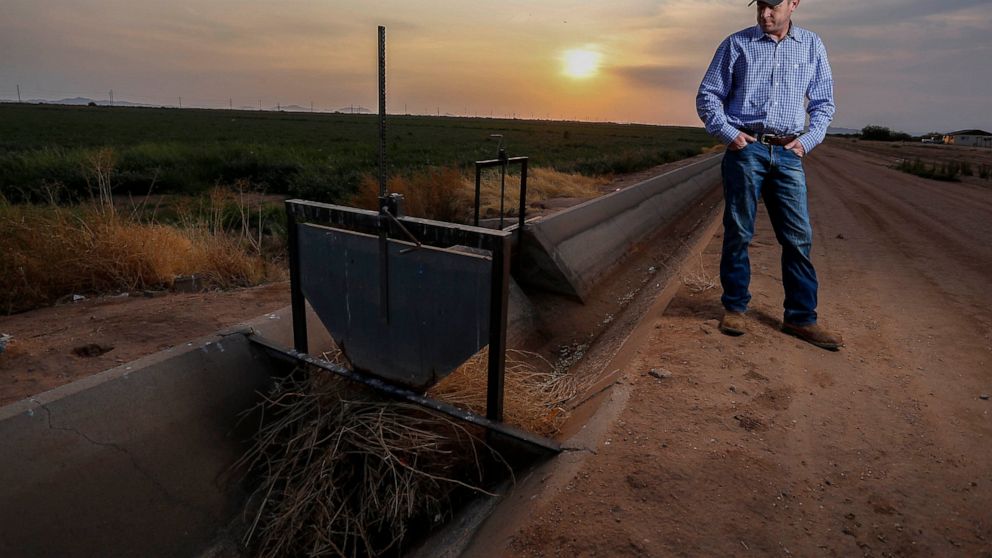 They knew this was coming. They have left fields unplanted, laser leveled the land, lined canals, installed drip irrigation, experimented with drought-resistant crops, and found other ways to use water more efficiently.

Still, the cutbacks in Colorado River supply next year will be a blow for agriculture in Pinal County, Arizona’s top producer of cotton, barley, and livestock. Dairies primarily rely on local farms for feed and will have to search farther out for supply, and the local economy will take a hit.

The cuts are coming earlier than expected as a drought has intensified, and reservoirs dipped to historic lows across the West. Scientists blame climate change for the warmer, more arid conditions over the past 30 years.

Standing next to a dry field, his boots kicking up dust, farmer Will Thelander said, “more and more of the farm is going to look like this next year because we won’t have the water to keep things growing everywhere we want.”

His father, Dan, tried to steer his kids away from farming, not because water would be scarce but because development was expected to swallow farms between Phoenix and Tucson where their family grows alfalfa, corn for cows, and cotton, some destined for overseas markets.

“It was fun just keeping the family business going, working with my dad,” said Thelander, a 34-year-old, fourth-generation farmer whose office is a dusty pickup truck.

Thelander manages almost half of the 6,000 acres of his family farms under Tempe Farming Co., much of which is devoted to corn for cows. He’s not planning on growing that crop next year, opting for others that will be more profitable on less land.