Hatch Grow review: A smart scale for infants that could have been great

The Grow is vaguely tongue-shaped, with a flat bottom and sloped sides. It’s roughly the height and width of two skateboards stacked side-to-side and weighs 7.5 pounds, which is light enough to lift with one hand (an important detail, given I’m constantly holding at least one of my twins). It’s also compact enough that it fits neatly on my current changing table.  That said, I had to ditch the padded changing pad that came with the table because, like any scale, The Grow demands an even hard surface. Hatch includes a safety strap to secure babies; it’s hooked to each side of the Grow and is buckled and adjusted in front to keep wiggly infants safely on the scale while being weighed or changed. It’s worth noting that these straps should not be tucked under the Grow, as this can affect the accuracy of the reading. 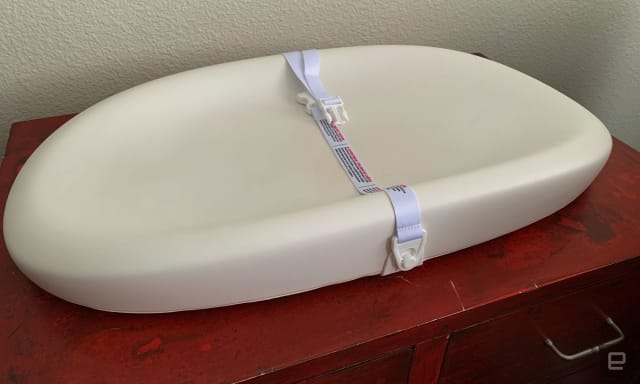 Although I worried initially that the plastic would grow cold as the temperature dropped overnight, it only ever got cool. The Grow can be cleaned with a damp cloth or a baby wipe, making it easy to sanitize between uses. However, the underbelly of the scale could be damaged if it comes into contact with liquid, so don’t go overboard with the disinfectant.

The scale runs on three AA batteries, which are included in the box… You have to remove the pull tab to activate the batteries and then pair to the app using Bluetooth to set it up. I couldn’t get connected on my first try, but replacing the batteries solved that issue. Given the minimal hardware, troubleshooting was pretty straightforward. Once I paired the device, the app showed instructions on zeroing out the scale and taking measurements.

Overall, the Grow is easy to operate. Tap the scale icon in the upper-right of the app dashboard to start a measurement. The app connects to the scale, and you’re offered two options: Record Weight or Start a Feeding. Record Weight gives you a one-time measurement of your child’s weight; Start a Feeding requires you to weigh your child before and after a bottle or breastfeeding session to determine how much they’ve consumed.

At ten months, my kids weigh between 16 and 21 pounds. Sometimes the Grow felt a bit small for them, especially as they’re in a peak “kick and wriggle constantly” phase. However, its weight limit is 44 pounds, so I can use it on them for a while still. At times they seemed fussy when I placed them on the Grow, but it’s hard to say if that’s because they didn’t like the harder surface for changing or if they were cranky over a dirty diaper (or being hungry, or tired, or mad that I wouldn’t let them eat floor lint again). The safety strap stayed put, was easy to adjust, and fit both my kids snugly.