MAC Ferosh! Powder Kiss Liquid Lipcolour ($24.00 for 0.17 oz.) is a lighter mauve with neutral-to-cool undertones and a satin finish. The texture was lightweight, mousse-like, and spreadable with a velvety glide that had soft slip but didn’t slide around during wear. It had rich color coverage that applied evenly, though a smidgen sat in my deeper lip lines in the close-up photos but wasn’t visible in person. The color lasted well for four and a half hours–which was quite far from the 10 hours claimed–and felt lightly hydrating while worn. 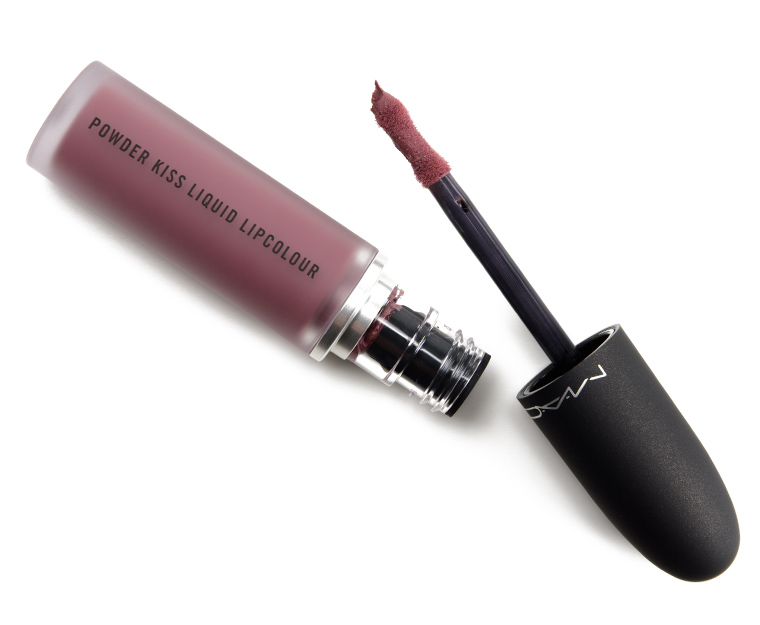 The formula is supposed to be long-wearing (“10 hours'”) with “immediate” moisture while “[blurring] lines and [smoothing] lips” that doesn’t settle, crease, flake, or feel drying. Per the brand, one applies using the “hourglass-shaped applicator.”

The texture has a more velvety, thicker feel that spreads well and feels plusher with more of a silicone-like glide (if you’ve tried a silicone-based primer, the sense of it on the lips was similar but creamier). The applicator worked well for applying and distributing products evenly. Still, it gathered more effect than necessary for my lips in a single pull of product to the point where I felt like it over-applied product to the detriment of application.

I had better luck applying product to my upper lip (especially around the cupid’s bow, as the applicator was better for getting this area) and then pressing my lips together and using a fingertip to diffuse and spread out the product to the rest of my lips. This ensured that there wasn’t too much product on my lips; too much resulted in the product pilling a bit and being uneven, especially along the inner area of my month, prone to getting on teeth, and sometimes catching on lip texture/imperfections. For reference: all swatch photos are as-applied with the included applicator only.

How to make video calls on an Amazon Echo Show

Wipro makes its biggest acquisition ever with $1.45bn takeover