Discovery and research of new molecular compounds is an expensive business, with development costs exceeding $10 billion per substance in some cases. Part of that comes from the need to closely examine every relevant molecule, studying its chemical composition and interactions and its physical structure at the atomic level. Despite advances in software to help model these compounds and molecules, there are still challenges in fully understanding their shapes through a two-dimensional computer screen. 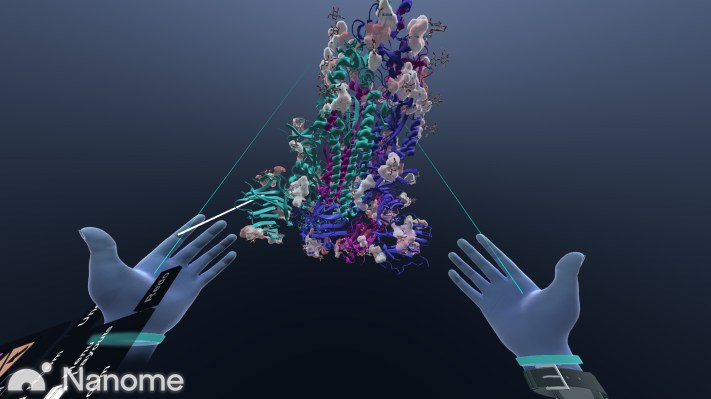 San Diego-based startup Nanome uses virtual reality to solve that problem. The idea for Nanome came out of CEO and Founder Steve McCloskey’s time in the nanoengineering program at UC San Diego, where he saw a need for a better understanding of three-dimensional molecular structures.

“Understanding structure empowers our users to understand how their designs function,” he wrote in an email. “Yet, the R&D process for drug discovery relies on 2D monitors, keyboard, and mouse, which limits the understanding of complex 3D structures or interactions and contributes to massive R&D costs averaging $2.5B per drug.”

Nanome recently closed a funding round led by Bullpen Capital for $3 million to establish new business partnerships, build up its brand, and expand its science and engineering team. “Nanome is reimagining the way we interact with science at a time when innovation in collaboration is more important than ever before,” said Bullpen Capital General Partner Ann Lai in a press release. Formic Ventures, led by Oculus co-founder Michael Antonov, also took part in the round.

McCloskey thinks that Nanome’s platform has become even more relevant during the COVID-19 pandemic, as researchers might be forced to work remotely on occasion, limiting their access to in-lab technology and software.

“Nanome helps scientists get on the same page quicker,” he wrote in an email. “Traditionally, scientists working with molecules use screenshots or screen sharing and rely on the mouse cursor and Zoom to communicate their insights and ask for feedback from other team members.” Nanome streamlines this process by bringing researchers to the same virtual reality space to work on molecule development together.

So far, Nanome has mainly worked on projects with companies in the food and beverage industry and another to develop more sustainable batteries. But they have plans to use this new funding to expand into pharmaceutical chemistry, synthetic biology, and even education. Their next product update will feature what McCloskey calls ‘Spatial Recording,’ which will allow users to record their work for later review – basically a screen recording but with a VR experience. “This is not only an amazing feature for asynchronous collaboration among researchers, but it is also useful for producing lectures and lessons,” he wrote in an email.