PORTLAND, Ore. — Extreme heat may be behind death in Portland, Oregon, this week, and emergency room visits for heat-related illness rose sharply as sweltering temperatures gripped the typically temperate Pacific Northwest for the second time this summer, authorities said Friday.

The cause of the death Thursday won’t be known for several weeks. The news was nonetheless a blow for authorities who faced criticism when hundreds of people died in Oregon, Washington state, and western Canada in a much hotter heat wave in late June that was fueled by climate change. 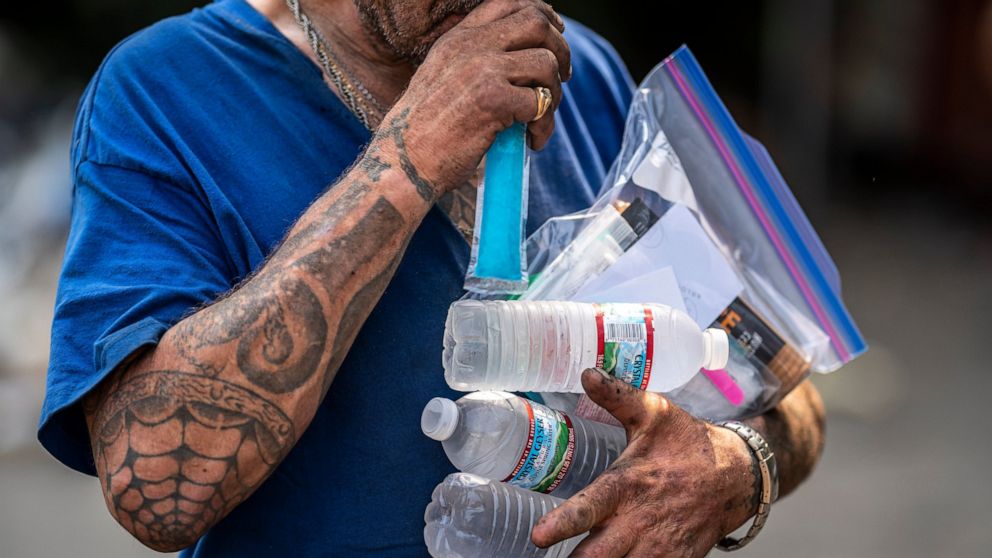 Temperatures that had been expected to soar to the triple digits in Portland for a third day Friday were somewhat suppressed by a thick veil of wildfire smoke, but the city still hit 95 degrees Fahrenheit (35 Celsius). Seattle reached 88 F (31 C).

The National Weather Service said heat advisories and warnings were also in effect from the Midwest to the Northeast and mid-Atlantic through at least Friday.

Forecasters said hot weather and smoke from wildfires in the Northwest would pose a problem through the weekend. Lightning sparked two new fires in southern Oregon late Thursday that churned rapidly through vegetation sucked dry of moisture by extreme drought in the U.S. West.

An air quality alert was issued through Saturday night for much of northwestern Washington because of smoke drifting in from blazes in the eastern part of the state and British Columbia. The sky over Portland had an eerie orange glow.

Temperatures in Portland reached 103 F (39 C) on Thursday — 20 degrees above average. In Bellingham, Washington, the high hit 100 F (38 C) for the first time on record, while Seattle topped out in the 90s.

It’s the second primary heatwave in less than a month in a region where many don’t have air conditioning.

A detailed scientific analysis found the June heat was virtually impossible without human-caused climate change. Meteorologist Jeff Masters with Yale Climate Connections said a similar study would need to be done with other heat waves. Still, there’s a general link between global warming and worsening heatwaves.

“If you increase your baseline temperature, you greatly increase your odds of extreme heat events,” said Masters, co-founder of the private Weather Underground company.

In Oregon, Gov. Kate Brown has declared a state of emergency over the heat and activated an emergency operations center. City and county governments have opened cooling centers, extended public library hours, and waived bus fares for those headed to cooling centers. A 24-hour statewide helpline will direct callers to the nearest cooling shelter and offer safety tips.

Authorities scrambled to provide relief to the vulnerable this week, including low-income older people and those living outdoors. Oregon volunteers on Thursday handed out water, portable fans, popsicles, and information about cooling shelters to homeless people in encampments on the outskirts of Portland.

Scott Zalitis was shirtless and ate lime-green popsicles handed out by a nonprofit group Thursday. He told volunteers that the temperature at his campsite reached 105 F (41 C) the day before.

“It’s miserable. I can’t handle the heat no matter what. So, I mean, it’s hard to stand. Even in the shade, it’s too hot,” Zalitis said. “You want to stay somewhere that’s cool, as cool as possible.”

The city closed all seven of its outdoor pools Thursday and Friday afternoons because of soaring temperatures. Before the closures, the line of people hoping to cool off stretched for more than a city block.

Warner Bros. ‘Reminiscence’ promo uses deepfake tech to put you in the trailer