Even though TCL, Oppo, and LG have been teasing the rollable phone form factor for some time now, none of them have launched one just yet. The next best thing, for now, is Oppo’s working prototype, three of which arrived in Hong Kong recently, so naturally, we went to take a closer look at this rare device. 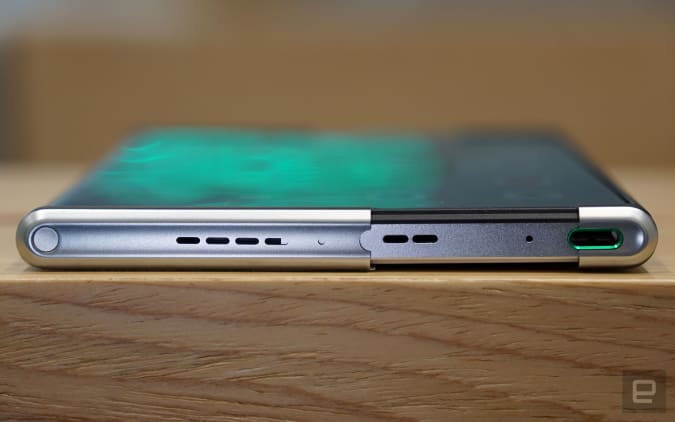 The idea of the Oppo X 2021 is to let you switch between a conventional 6.7-inch screen and a mini-tablet-like 7.4-inch screen, with the former offering better portability and the latter a better experience for video reading, gaming, and multi-tasking. This is achieved by rolling part of the flexible OLED panel into the back of the phone, which supposedly avoids the creasing issue we’ve seen on foldable.

As I poked around the flexible screen, I was impressed by how tough it felt. This was partly thanks to the “2-in-1 plate” comb-like sliding structure underneath, which provided a rigid structure in phone and tablet mode. In addition, the OLED panel itself is reinforced by a thin caterpillar track laminate consisting of steel parts, which improves the overall strength while still keeping it flexible.

As a concept device, the Oppo X 2021 was surprisingly usable — at least the weight and thickness were within my acceptable range, as both were similar to those of my LG Wing. Within the limited time I had, I got to try Chrome, YouTube, and Instagram on the unit (I had to side-load Google Play), all of which could dynamically resize in response to the screen movement. That said, this phone was missing a couple of essential features: volume keys and a selfie camera. Chances are Oppo left those out to help speed up development, and it’d most likely add those back before launching the device if it ever does.

Garmin Lily vs. Fossil Gen 5: Which should you buy?