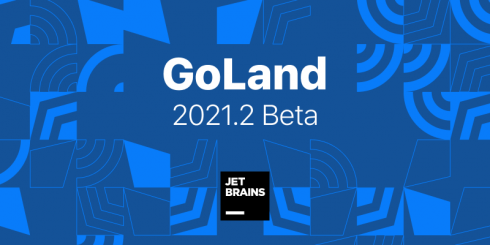 The focus behind GoLand 2021.2 was to add new features for Go modules, according to JetBrains, the company behind the solution.

The new version includes a new option for formatting, support for Go 1.17 features and support for generics in ‘.go’ files. Previously, when ‘go.mod’ files were edited, GoLand would automatically run go list commands after every modification, a behavior which can now be controlled.

There are also some UI improvements, such as a better view of attached projects.

This is also the last build in the Early Access Program that doesn’t require a subscription. Additional details are available here.

“Technology alone won’t transform businesses, a continuous flow of new skills, creativity and innovation will. Since its inception, A Cloud Guru has empowered enterprises to unleash the cloud’s full potential by aligning talent, technology and vision,” said Sam Kroonenburg, the co-founder and CEO of A Cloud Guru. “Together Pluralsight and ACG will chart an accelerated path to success at every stage of cloud maturity while driving cloud adoption and innovation within corporations.”

A Cloud guru’s certification courses, hands-on labs and sandboxes, exams and quizzes will be combined with the existing cloud courses from Pluralsight Skills.

Contrast’s Security Trace format shows exactly where a vulnerability appears in the code, while the integration provides small videos and interactive contextual that are specific to that code.

“We need developers to be security-aware, not security experts, and education and automation are at the foundation for DevSecOps transformation. Just-in-time training within the Contrast platform is immensely more effective — and efficient — than traditional security classroom training that is theoretical rather than practical,” said Nikesh Shah, the senior director of strategic alliances at Contrast Security.

Google facing antitrust claims over Play Store fees
Google is facing antitrust lawsuits from a group of 37 attorneys general, who accuse the company of forcing consumers into in-app payments that Google gets a large cut of. This is the second large lawsuit against Google in a span of six months.

“Through its illegal conduct, the company has ensured that hundreds of millions of Android users turn to Google, and only Google, for the millions of applications they may choose to download to their phones and tablets,” New York Attorney General Letitia James said in a press release. “Worse yet, Google is squeezing the lifeblood out of millions of small businesses that are only seeking to compete.”

Apple has faced similar scrutiny for its practices with the App Store, which resulted in the case between Apple and Epic Games over whether Epic Games could bypass Apple’s fees by accepting mobile payments outside the App Store.