Rookout’s Agile Flame Graphs was launched to dynamically profile distributed applications in production and provide developers with a fully-visualized understanding of how their code impacts other applications.  Agile Flame Graphs allows software engineers to select a section of code and instantly visualize the latency between functions and individual lines of code, within and across distributed systems,” said Liran Haimovitch, the CTO and co-founder of Rookout. 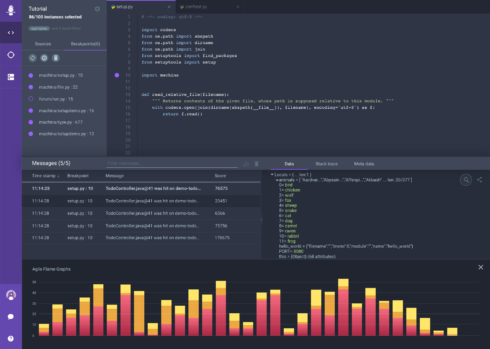 According to the company, Agile Flame Graphs collect the most valuable data across applications such as CPU consumption and latency between microservices and then visualize it in an easily-accessible manner.

ServiceNow acquires Intellibot
ServiceNow announced plans to acquire Intellibot to build its capabilities natively into the Now platform and enable customers to integrate more easily into modern and legacy systems.

ServiceNow stated that the acquisition supports ServiceNow’s commitment to the Indian market, and it also plans to develop two new data center facilities by the first quarter of 2022.

“We are proud to join forces with ServiceNow as it continues to invest in powerful end‑to‑end automation capabilities to make the world of work, work better for people,” said Srikanth Vemulapalli CTO and co‑founder of Intellibot. “Our RPA combined with ServiceNow workflows will help businesses better connect disparate systems to accelerate innovation and thrive in a new world of work.”

“The latest server release is an ideal solution for teams that have in-house DevOps and Kubernetes expertise, have their own data centers, or have other highly custom needs that can’t be served elsewhere,” Nathan Fish, a senior product manager at CircleCI, wrote in a blog post.

Other new features in version 4.5 include a UI upgrade, an interactive learning zone, and GitHub integration.

The developers behind the project are now working on adding microservices written in Go and TypeScript (Deno) that allow users to build and host a backend on popular cloud servers, all without leaving GraphQL Editor.

Want To Reduce Your COVID-19 Risk? Get Some More Sleep.